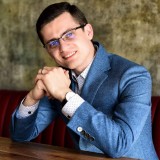 I help growing solopreneurs build a sustainable and balanced business with proven and actionable advice.

I am also the creator and co-founder of Elevatr, a new email marketing software that lets you build an engaged and targeted audience with powerful and easy-to-use email marketing tools. Are you ready for GDPR this May? Or do you feel overwhelmed with all the information you find online and don’t know what to do next?

With the May 2018 deadline for GDPR (General Data Protection Regulation) approaching, people are still trying to figure out what it is and what it implies.

It is predicted that by the end of the year 2018, more than half of companies will not be fully compliant with the new set of rules and requirements.

I bet you do not want to be among them, but if you are still wondering how GDPR will affect your small business and your email marketing, in particular, you are in the right place.

Here you can find your essential guide to achieving compliance.

END_OF_DOCUMENT_TOKEN_TO_BE_REPLACED You work hard to create a thriving online business – sometimes you have to do it quickly while you’re busy with other tasks that consume your days.

In the rush to get more things done you can miss details or be sloppy and you might even make things worse for yourself.

That is why I created this 12-point checklist to make sure you set your blog up for success in 2019.

If you get stuck with any of the following tasks, leave a comment below and remember that I am always available to help.

END_OF_DOCUMENT_TOKEN_TO_BE_REPLACED Is Google Analytics your go-to service for getting insights on your website traffic and making informed marketing decisions?

Have you managed to stay up to date with the latest changes and feature enhancements in Google Analytics?

Keeping track of every new improvement or new feature in Google Analytics is pretty difficult, especially if you are not active in the community or have someone dedicated to staying up to date with all the changes and reporting them to you.

That is why I decided to show you the seven most important features and enhancements added to Google Analytics recently and how to make the most of them.

I also asked top Google Analytics experts what they think about these features, and you will find their opinions in this article.

END_OF_DOCUMENT_TOKEN_TO_BE_REPLACED END_OF_DOCUMENT_TOKEN_TO_BE_REPLACED

What if, 5 minutes from now, you had a professional sign-up form designed, ready to boost email subscribers?

That may sound impossible, but it’s not.

In the past 6 months I’ve been working on a tool that will make this possible for you.

This tools is easy to use. It’s fast. Secure. It just works. And it’s called Elevatr.

Keep reading if you:
END_OF_DOCUMENT_TOKEN_TO_BE_REPLACED